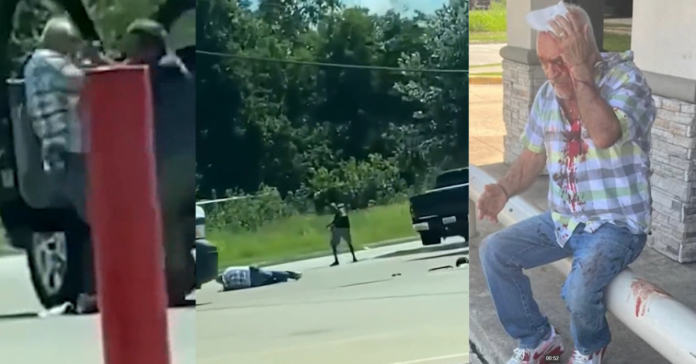 A 73-year-old grandfather of 11 stepped in and stopped the armed robbery of a young woman outside a check-cashing business in north Houston. Simon Mancilla Sr. saw the man choking the woman and pulled up in his truck to help.

“I open my window, ‘Hey man don’t make a problem,'” Mancilla Sr. said. But the armed thug turned on him and forced Mancilla out of his own truck. The two fought.

The armed thug jumped inside and Mancilla physically tried to pull him out of the truck and subdue the violent criminal. (See Videos Below)

Mancilla got pistol-whipped and fell to the ground buy not before landing a few good shots on the felon.

Asked why he would risk his lufe for a stranger Mancilla said:

“His eyes were full of blood, he couldn’t see anyone,” his son said.

This happened on Sept. 7 outside the business on Airline near Parker Road just east of the North Freeway. The fight between the hero and the robber was caught on video and police are hoping someone will recognize the suspect.