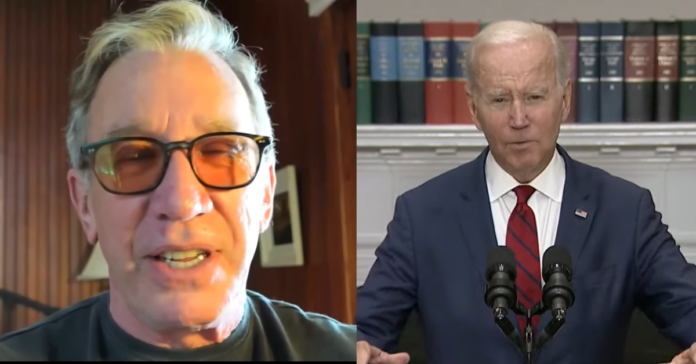 Comedy legend Tim Allen shut down critics outraged he mocked Joe Biden after the president had another awful interview where multiple statements had to be walked back later by staff. The left was full of its patented fake outrage and let Tim have it on social media.

Tim’s original joke is as funny as it is simple. He said: “Biden was on 60 minutes. I heard he asked how long the show was.” After the backlash, Tim silenced his critics with the perfect comeback:

“I started my 35 year stand up career because of genius’s like the man who said: “I never met anybody who said when they were a kid, I wanna grow up to be a critic.” – Richard Pryor”

It wasn’t just Tim who sounded the alarm about Biden’s interview.

NORAH O’DONNELL: Well, there is fallout tonight after President Biden’s interview with 60 Minutes, comments he made about the pandemic, led stocks of three COVID vaccine makers to plunge, shares falling as much as 9 percent. CBS’s Ed O’Keefe reports from the White House.

I started my 35 year stand up career because of genius's like the man who said:
"I never met anybody who said when they were a kid, I wanna grow up to be a critic." – Richard Pryor

XAVIER BECERRA: Make no mistake, people are still dying. And what the President is saying is that we all want to get back to where we were before COVID.

O’KEEFE: While overall, case rates are dropping nearly 400 people are still dying each day with about 30,000 currently hospitalized.

And Dr. Anthony Fauci today warned that vaccination rates are too low to end the pandemic.

ANTHONY FAUCI: It is likely that we will see another variant emerge, and there’s already on the horizon.

O’KEEFE: Mr. Biden was also asked on 60 Minutes about whether he plans to run for reelection.

SCOTT PELLEY: You say that it’s much too early to make that decision. I take it the decision has not been made in your own head.

JOE BIDEN: Look, my intentions I said to begin with is that I would run again, but it’s just an intention.

Is it a firm decision that I’d run again? That remains to be seen.

Biden was on 60 minutes. I heard he asked how long the show was.

And this, kids, is why Tim Allen isn’t the voice of Buzz Lightyear anymore. He’s gone full Scott Baio. Or is it Kevin Sorbo? Meh, what’s the difference. 🤷‍♂️ pic.twitter.com/n8POzLZUoe