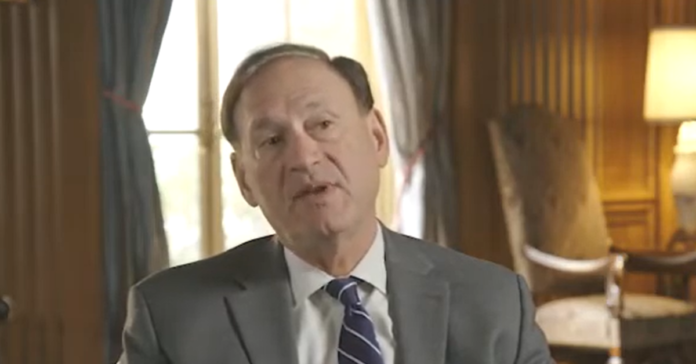 Supreme Court Justice Samuel Alito broke his silence after someone leaked his opinion that overturned Roe v Wade. The left lost its collective mind over the leak and have spun dark fantasies about what it will mean most of them debunked by the opinion itself.

One person in the crowd at the Antonin Scalia Law School at George Mason University asked Alito, “I think it would just be really helpful for all of us to hear, personally, are you all doing okay in these very challenging times?”

Alito said: “This is a subject I told myself I wasn’t going to talk about today regarding, you know — given all the circumstances.

“The court right now, we had our conference this morning, we’re doing our work. We’re taking new cases, we’re headed toward the end of the term, which is always a frenetic time as we get our opinions out.”

Alito wrote in the leaked opinion:

“Roe was egregiously wrong from the start. We hold that Roe and Casey must be overruled

“It is time to heed the Constitution and return the issue of abortion to the people’s elected representatives.

“We, therefore, hold the Constitution does not confer a right to abortion.

“Roe and Casey must be overruled, and the authority to regulate abortion must be returned to the people and their elected representatives.”

Alito’s topic centered on how Scalia, who died in 2016, had transformed the court’s methods of reviewing federal laws, putting far more emphasis on the text of the law rather than the intent of Congress.

It is a method he favors, Alito said, but it was used incorrectly in the gay rights case, Bostock v. Clayton County.

In that case, the court ruled 6 to 3 that a landmark federal civil rights law from the 1960s protects gay and transgender workers, a watershed ruling for ­LGBTQ rights written by one of the court’s most conservative justices, Neil M. Gorsuch.

Gorsuch and Roberts joined the court’s liberals in the ruling.

They said Title VII of the Civil Rights Act of 1964, which prohibits discrimination “because of sex,” includes gay and transgender employees.

Gorsuch is a “colleague and friend,” Alito said, and someone he is happy to have on the court. But he said the decision relying on the text of the law alone was “in my view indefensible.”

Alito gave a detailed talk on textualism and renewed criticism of gay worker discrimination decision at first address after Roe leak, but was reluctant to discuss how Supreme Court justices are getting along https://t.co/HLLF84WYju